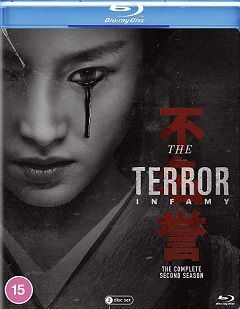 The Terror: Season 2 "Infamy" - Released from 23rd May
And to celebrate we have a great competition for you and a copy on Blu-ray to give away.
Synopsis:
Lauded series The Terror garnered international acclaim from critics and viewers alike and now with a brand-new premise and setting but with the same stunning production values and gripping story lines, the second series The Terror: Infamy is set to hit our screens. Following its run on BBC2, the series is set for its Blu-ray, DVD, and digital release from Acorn Media International on 23 May 2022. The Terror One and Two Box set will also be available on Blu-ray and DVD.
The Terror: Infamy is a thrilling supernatural series set against the backdrop of World War II and the Japanese internment camps and boasts powerful performances from an outstanding cast of international talent. The line-up includes a stand-out turn from renowned actor George Takei (Star Trek) who himself spent time in an internment camp as a child and acted as a historical consultant on the drama.
Chester (Derek Mio – Grey’s Anatomy, Geek) lives with his family on Terminal Island, a few miles south of Los Angeles, just off the coast of California. He and his father, Henry (Shingo Usami – Unbroken), are fishermen but Chester seeks more. He’s in love with a Spanish-American student named Luz Ojeda (Cristina Rodlo – Miss Bala, Too Old to Die Young) and doesn’t understand why his immigrant mother, Asako (Naoko Mori – Torchwood) and father choose to remain confined to a small swath of the big world – especially after travelling so far in the pursuit of freedom.
In the aftermath of Pearl Harbour, the family’s comfortable life is about to change forever as they’re forcibly uprooted and shipped off to an internment camp, where fear lurks in both supernatural and human form.
A string of relentless, brutal and bizarre deaths haunts the community, and Chester and his family are menaced by a mysterious and murderous shapeshifting entity. What spirit lies behind The Terror, and can the family overcome it and save those dearest to them?
Craftily weaving a semi-historical narrative with modern parallels, co-creators Max Borenstein (Godzilla) and Alexander Woo (True Blood) deliver an enthralling and potent exploration of monstrosity – both mythical and man-made. The Terror: Infamy is an unsettling, compelling and captivating must-watch.
Pre-Order from Amazon at https://amzn.to/3LbyslS
For your chance to win just answer the question below.

COMPETITION CLOSED
Quick Terms and conditions - For full T&C click here
1. Closing date 30-05-22
2. No alternative prize is available
3. When the competition ends as indicated on this page, any and all entries received after this point will not count and emails blacklisted due to not checking this page first.
4. Winners will be chosen randomly and will be informed via email.

5. Entries that come directly from other websites will not be accepted.
Posted by JD at 10:09