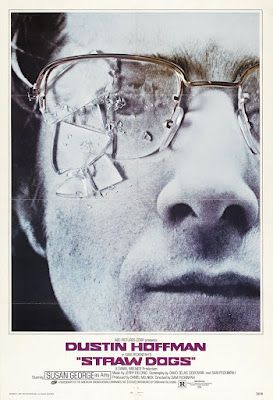 Straw Dogs is a 1971 psychological thriller film directed by Sam Peckinpah and starring Dustin Hoffman and Susan George. The screenplay, by Peckinpah and David Zelag Goodman, is based upon Gordon M. Williams's 1969 novel, The Siege of Trencher's Farm. The film's title derives from a discussion in the Tao Te Ching that likens people to the ancient Chinese ceremonial straw dog, being of ceremonial worth, but afterwards discarded with indifference.

The film is noted for its violent concluding sequences and two complicated rape scenes, which were subject to censorship by numerous film rating boards. Released theatrically in the same year as A Clockwork Orange, The French Connection, and Dirty Harry, the film sparked heated controversy over a perceived increase of violence in films generally.

The film premiered in the UK in November 1971. Although controversial at the time, Straw Dogs is considered by some critics to be one of Peckinpah's greatest films.