A revenge-driven puppeteer applies his talent to humans in this supernatural horror film.

A scientist invents a "magic box" that brings the dead back to life...but when he dies, his assistant Malcolm Shanks, a middle-aged mute puppeteer takes over his invention. Mime Marcel Marceau, in his first major film role, plays the titular Malcolm Shanks. It was the last film directed by producer-director William Castle.

Email ThisBlogThis!Share to TwitterShare to FacebookShare to Pinterest
Labels: Shanks

Twenty years after an accident caused the death of the lead actor during a high school play, students at the same small town school resurrect the failed stage production in a misguided attempt to honour the anniversary of the tragedy—but ultimately find out that some things are better left alone.

Email ThisBlogThis!Share to TwitterShare to FacebookShare to Pinterest
Labels: The Gallows

Following an accident, Jeremy Spensser's brain is transplanted by his scientist father into the huge body of an unattractive, frightening cyborg, this to save his brilliant son's mind so it can continue to serve mankind. As Jeremy's mind loses control over his mechanical body, other unexplained powers suddenly emerge from the strictly mechanical body, including mind control of humans and a death ray emanating from both its eyes.Finally, Jeremy's out-of-control body goes on a rampage in the United Nations building, killing several people. Only when Jeremy's young son confronts the cyborg is Jeremy able to restore his self-control long enough to tell the boy how to switch off and destroy the body of the "colossus."

Email ThisBlogThis!Share to TwitterShare to FacebookShare to Pinterest
Labels: The Colossus of New York 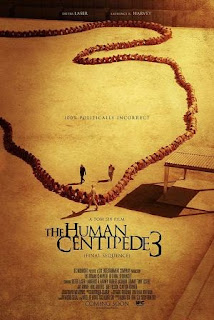 Taking inspiration from The Human Centipede films, the warden of a notorious and troubled prison looks to create a 500-person human centipede as a solution to his problems.

Email ThisBlogThis!Share to TwitterShare to FacebookShare to Pinterest
Labels: The Human Centipede 3

Nariko, HEAVENLY SWORD’s flame-haired, cult-worshipped heroine, finally gets to slice and dice her way into British homes on June 15, courtesy of TriCoast UK in association with Movie Partnership and Fusion Media. This is TriCoast’s first UK release and the kick-off release for the tri-distributor partnership, which sees Fusion Media handling the DVD release and The Movie Partnership piloting the digital platforms.

Based on a hugely popular Sony PS3 Video Game, which has sold well over a million copies worldwide, the movie features the voices of Australian star Anna Torv (Fringe) as Nariko, Alfred Molina (Spiderman 2) as King Bohan and Thomas Jane (Hung, The Mist) as Loki.

A dramatic tale of revenge, ‘Heavenly Sword’follows the story of Nariko (Torv), a trained warrior who possesses a sought after blade with incredible powers. As the sword’s guardian, she must face a power-hungry ruler King Bohan (Molina) and his unyielding army, who are determined to obtain the powerful sword for themselves.

The DVD is packed with bonus footage including behind-the-scenes interviews with the cast and filmmakers.

It can be purchased in Asda stores nationwide and is available on itunes, amazon Instant Video, Sony Playstation, Xbox Video. Google Play & Virgin Movies on Demand

From the director of “Room 237” comes a documentary-horror film exploring the phenomenon of sleep paralysis through the eyes of 8 very different people. These people (and a surprisingly large number of others) often find themselves trapped between the sleeping & waking worlds, totally unable to move but aware of their surroundings while being subject to frequently disturbing sights and sounds. Strangely, despite the fact that they know nothing of one another and had never heard of sleep paralysis before it happened to them, many see similar ghostly "shadow men." Just one of many reasons people insist this is more than just a sleep disorder. The film digs deep into not only the particulars of these 8 people’s uncanny experiences through elaborate, sometimes surreal dramatizations, but also explores their search to understand what they’ve gone through and how it’s changed their lives.