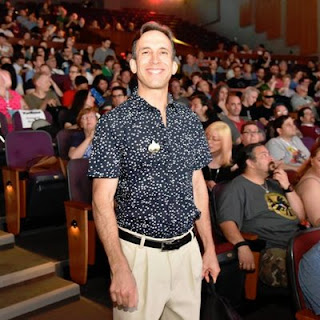 When did you first become interested in writing and film?

I was interested in film pretty much since I was born. My parents liked taking the kids to drive-ins and movie houses fairly regularly, and we loved watching old movies together at home too. I was lucky that Mom and Dad never took me to a Disney film. Instead, we went to Hammer and American International Pictures movies. Then studio fare like the original PLANET OF THE APES films, JAWS, THE OMEN, THE SENTINEL, CLOSE ENCOUNTERS, STAR WARS, etc. Soon I started writing about the movies I enjoyed and began cutting up my valuable back issues of FAMOUS MONSTERS to create my own “Monster Book.”

During high school, I became more serious about writing about genre films. Inspired by magazines like FAMOUS MONSTERS, STARLOG and FANGORIA, I dreamed of being published someday. I created a fanzine in high school while president of the Sci-Fi Club called FANTAZINE, where I penned articles and interviews. The first one I did was with Tom Savini! As I teenager, I would attend horror and sci-fi conventions and meet celebrities. Various STAR WARS and STAR TREK actors would also let me interview them, and before I even graduated from New York University, a STARLOG knockoff called ENTERPRISE INCIDENTS bought my Anthony (“C-3PO”) Daniels interview. Legendary editor Forry Ackerman had helped me land the sale.


How did you begin your career with Fangoria?

I first joined the FANGORIA staff in July of 1985. It was my first job out of college. I had been freelancing to Fango’s sister publication STARLOG during my last year at NYU, so I got an early foot in the door. I networked my way into the job. I began as an Editorial Assistant, but within a month on the job, editor David Everitt decided to move on. Since I was fresh out of college and this was my first job in publishing, I was a little too green to take over the job myself. So I served as Managing Editor to Dave McDonnell (STARLOG’s chief), who took over as Editor until I got my wings. The following year I was promoted to Editor in Chief. Back then I thought that I would be with the company three years and move on. But since this was always my dream job, I never wanted to leave. I actually enjoyed getting up in the morning to go to work.


Why do you think horror and fantasy books and movies remain so popular?

In such a grim world, we need an escape. Horror films are a way of conquering our fears, and fantasy and sci-fi are wish-fulfillment mind trips.


Why do you think horror is so criticized and censored?

Horror is the “bad boy” of cinema. Just like parents warned their kids about rock and roll in its early days, horror was always a forbidden. Moral guardians feel they have to protect us from these films, but they only make them more desirable to their fan base.

British horror has always excelled in the Gothic and quiet horror. Period pieces and the like. Brit horror has been less mainstream and cookie-cutter than US studio horror. Though the recent wave of British horror hits, like THE DESCENT, 28 DAYS LATER, EDEN LAKE, the Ben Wheatley films, etc., seem to capture the flavor of the best of 1970s independent American horror. The differences are a lot subtler now, as British filmmakers aim to capture the American audience.

All the usual suspects. I love all kinds of horror movies from classic monster pictures, to the Hammer greats, to the AIP Cycle, to slasher films, to the diabolical devil movies (ROSEMARY’S BABY, THE EXORCIST and THE OMEN). There is a rich tradition and variety of horror films and I am open minded enough to embrace them all. As the new century began, I was most impressed with the horror films that began pouring out of Japan (RINGU), South Korea (recently TRAIN TO BUSAN), and Spain (THE NAMELESS).


What do you consider your greatest accomplishment during the Fangoria years?

I made FANGORIA a household name. Took it out of the underground and made it mainstream, but without losing its edgy voice and attitude. The mag became slicker, more professional. At the same time, I supervised the brand’s expansion into movies, conventions, DVD, VOD, books, TV, etc.


What was your favorite part of Weekend of Horrors?

It was always a huge thrill to welcome horror’s greatest on our stages. I never thought in my wildest dreams that I would meet such childhood heroes as Vincent Price, Christopher Lee, Jack Nicholson, George Romero, Anthony Perkins and countless others who appeared with us. I have always found horror celebrities to be the most friendly and normal people out there. Same goes with the fans. I am always touched when I meet fans who tell me how important the conventions were to them. My work with Monsterpalooza captures that Fango con magic and has taken it to a whole new level, in terms of presentation and scale.


What is your favorite haunted attraction?

Universal Horror Nights in Orlando is the ultimate scream. You need at least two visits to experience it all.


Tell us briefly about Fangoria Radio.

That was one of the highlights of my career. Every Friday night, from 10 pm to 1 am, hosts Dee Snider, Debbie Rochon and myself interviewed the best in horror. Right in the heart of NYC. We had bands in the studio, amazing guests (Mel Brooks, Bruce Campbell, Robert Englund, Rob Zombie, Quentin Tarantino… the excitement never stopped!), fans calling in, crazy contests… Alas, our satellite radio show became too expensive to produce, so after four successful years, we went off the air.


Do you have any advice for new filmmakers?

Just do it. The technology to make movies is cheaper and more accessible than ever, and horror is more popular than ever. So many outlets to get your work out there, so make your dreams and our nightmares happen.


What is your opinion of the new crop of independent films?

Great stuff out there. HEREDITARY, for example, was one of the best and scariest movies in years. I also loved indie hits like THE WITCH and IT FOLLOWS. So much great work is being done these days.

A dream come true. They are so approachable and friendly. I truly am blessed to have made a career in horror.

Consulting and writing for the relaunched FANGORIA magazine. Hosting and assembling panels for the two California Monsterpalooza conventions. Programming movies for #1 genre festival Fantasia in Montreal. Hosting horror movies screenings in NYC. Hope to be producing a few horror movies in 2019, like ZOMBIE WEDDING, as well as two- non-horror movies, PUMPING UP and GRAND AVENUE.

This is my recent bio.

Tony Timpone served as Fangoria editor-in-chief from 1987-2010 before moving on to manage the company’s Video on Demand and DVD divisions. As a co-host/producer, Timpone worked on Fangoria Radio for Sirius XM Satellite Radio for four years. In the 1990s he helped guide the first three FANGORIA feature films to the screen: Mindwarp, Children of the Night and Severed Ties. In 2004 Timpone served as associate producer to Bravo’s 100 Scariest Movie Moments and was a producer on the syndicated 1990s special The Horror Hall of Fame. For 2018’s 7-part cable documentary series AMC Visionaries: Eli Roth’s History of Horror, Timpone worked behind the scenes as a writer and researcher and in front of the camera as a commentator for each episode.

Timpone has been a frequent media spokesman for the horror industry, making appearances on over 100 TV and radio shows, DVD supplements and documentaries. Since 1998, he has been the Co-director of International Programming for Montreal’s Fantasia Film Festival. Currently he moderates and programs panels for LA’s gargantuan Monsterpalooza conventions; produces Blu-ray disc extras; serves as a programmer and consultant to the NYC Horror Film Festival; and runs Dread Central’s screening series Dread Vision. Timpone was also hired as Vice President to the emerging Horror Equity Fund (www.horrorequityfund.com). You can follow him here: @tonytimpone1
Posted by JD at 14:40