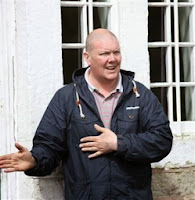 Dominic Brunt (left) is probably best known as Paddy in the ever-popular EMMERDALE FARM but he is increasingly gaining a reputation as a first-class horror filmmaker, and on the eve of BEFORE DAWN receiving its network TV premiere on the Horror Channel, Brunt reveals how a row with his wife led to the making of the film, news on his next feature DELETED  and why he’s always been a massive horror fan.


Q: What inspired you to make BEFORE DAWN?

DB: I have always been a massive horror fan and within the genre, I have always enjoyed a good zombie film the best. I co-run the Leeds Zombie Film Festival each April so this gives me an excellent excuse to watch many more. My wife however, really doesn’t fancy them much at all and always criticised my choice of viewing. She is much more interested in European cinema and in particular, French cinema.

Before Dawn was really born from a healthy row between the two of us as to how she would make a zombie film in the European style with detailed characters and a realistic, very British set up.

Q: BEFORE DAWN has been described as ‘horror with a heart’. What came first when you developed the story – the zombies or the relationship between you and your on-screen wife?

DB:  We were both fighting our own corner where the heart of the story is concerned. It was always going to be a zombie story but Jo was really insistent that we bring the characters back story and relationship to the fore. The film had to be intriguing from the start, before there was any sign of a threat.

Q: You cast your wife opposite you.  Does this mean BEFORE DAWN has an autobiographical thread running through it?

DB: Well, we played to our strengths and brought our own differences to our performances. I’m Northern, Jo is Southern. I’m from a working class background, Jo is from a middle class background. I think the fact that you have a male and a female together in a serious situation is grounds for enough tension and drama.

Q: Most people know you as veterinarian Paddy Kirk in ‘Emmerdale’. Does the horror genre give you a chance to express your darker side?

DB:  The horror genre has been a huge part of my life since I was 13. I could sit and quote every line from Dawn of the Dead, Evil Dead, The Exorcist etc and I still watch mostly horror films, classic and contemporary almost every night.  I like being scared and I like a good special effect. I really enjoy watching a situation played out to it’s worse case scenario.

Q: You followed BEFORE DAWN with a short called SHELL SHOCKED, both of which have been premiered at FrightFest. Did you have a good experience on both occasions?

DB:  We have been very fortunate to have had the support of FrightFest. So many other opportunities opened up to us as a result. It really did seem, we were all of a sudden taken very seriously by other film festivals from around the world and at home. This in turn has led to distribution in all sorts of territories and gaining distribution from the fantastic Metrodome in the UK . I’ve also made life long friendships at FrightFest. I met the best people and watched the best films.

Q: Are you planning another feature film soon? If you are, what can you tell us about it?

DB: We are in pre-production on our next feature, “Deleted”. It’s a violent, female revenge drama which starts shooting on March/April.

Q: Ever thought of turning EMMERDALE into a horror film?

DB: I’d love to do a one-off late night special with zombies running amok through the village.

Q: Do you eventually want to move away from television acting and focus full-time on directing feature films?

DB: NO!!! I want to stay at Emmerdale. I love the job, I love the people and I really love playing the character of Paddy. I think it’s possible to make a feature every two or three years with a short in between without any adverse negative effects on the show. I don’t want to do anything by half.

Q: BEFORE DAWN is receiving its UK TV premiere on Horror Channel. You must be pleased.

DB: We’re over the moon. We can’t wait. Obviously I’ve seen it hundreds of times with various edits and dubs but to turn the telly on and watch the film we all slaved over for two years is going to be emotional. There have been many highlights to Before Dawn including festivals, holding the official DVD box for the first time, seeing it in on sale in the local supermarket, seeing a Japanese poster for the film but showing on Sky Horror Channel will be a real benchmark in how far we’ve come.  I’ll be there with my hot chocolate.

Q: What are your top three favourite horror films?

DB: Dawn of the Dead, Night of the Demon, Evil Dead

Q: And finally, have you got a real-life horror story you can tell us?

DB: There are loads of really terrible things that we all go through in life, like losing someone you love or a truly eye watering tax bill but I love submerging myself in a fantasy and using film as an escape. Being told a good story whether it be horror or any genre is the reason I keep watching films. Watching other people go through all the drama is a great way of drawing your attention away from the fears of just being alive.

Dominic Brunt, thanks you very much