Jeff Strand was born in Baltimore, Maryland, but moved to Fairbanks, Alaska when he was six months old, so his memories of Baltimore are hazy. He grew up in the cold, where he desperately wanted to be a cartoonist. Then he wanted to make video games. Then he wanted to write movies. Actually, he still wants to do all of those things, but for now he's quite happy writing lots of demented novels.

His novels are usually classified as horror, but they're really all over the place, from comedies to thrillers to drama to, yes, even a fairy tale.

Because he doesn't do cold weather anymore, he lives in Tampa, Florida with his wife and two cats.


Tell us how you became involved in horror fiction.

I'd written some (very bad) horror fiction in high school and college that was never published, but then I focused entirely on comedy for a few books. The last of those was Graverobbers Wanted (No Experience Necessary), which was supposed to be a lighthearted comedic mystery romp, but very quickly turned into the kind of book where an insane guy ripped his own eyeballs out. For some reason, this kind of scene made readers classify the book as "horror." Shortly after that, I decided that I wanted to focus on a specific niche, and so I became a comedic horror guy!

How many horror stories (or novels) have you written?

Fifteen horror novels, five novellas, and eighty-five short stories. Plus some non-horror novels and various bits and pieces of other stuff.


Tell us about your work with J.A. Konrath.

Joe and I wrote the novella Suckers together, which brought my Andrew Mayhem character and his Harry McGlade character together to see who was the most incompetent. We also co-wrote the novel Draculas with F. Paul Wilson and Blake Crouch. A lot of people say "Hey, [Insert Author Here] writes just like you!" and I never agree with them, but when my friend Michele Bardsley said that JA Konrath's style reminded her of mine, I read Whiskey Sour and thought, wow, she's right! Suckers II and Draculas II are both in the discussion stages, so lock up your children.

Please tell us what it was like to learn your craft when you were younger.


Did you enjoy reading shocking and terrifying stories when you were growing up?

No. Not at all. I was a total wuss. I didn't get into horror fiction until I was in high school, though once I did get into it, I read almost nothing else! It's only been within the past few years that I've made a conscious attempt to read outside of the genre.


How sick are you of writng about Andrew Mayhem? (although it has been a great commercial and critical success).

Not at all! It helps that the third Mayhem novel was published in 2004, and the fourth was published in 2012, so it's not like I'm anywhere close to burning myself out on the character. He'll almost certainly return for a fifth novel, though George and Lou (from Wolf Hunt) will be returning before him. I'm not at all opposed to sequels, but I'm usually more inclined to write about new characters than return to the old ones. 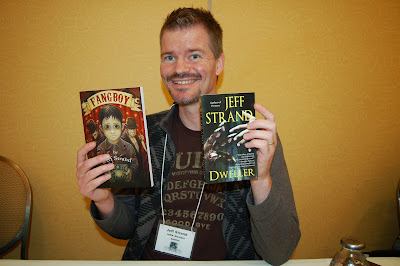 What do you feel is your greatest accomplishment as an artist so far?

Wow, that's a tough one. I don't think there's any one thing that I'd point to and say "Yes! This is my masterpiece! This is what defines me!" However, if I had to erase everything I've created from existence except for a single piece of work, after I stopped sobbing and begging I'd probably spare Dweller.


I would be a Philistine if I didn’t ask this. How did it feel to be Master of Ceremonies at the Stoker Awards?

Despite my stomach-churning nervousness each time (and I've done it five times), I love it. It's a lot of work because I take it very seriously and make sure I'm thoroughly prepared...even if, every year, there are a bunch of frantic last minute changes while I'm sitting there, feeling sick, unable to eat my banquet dinner. I don't know yet if I'll be doing it next year, or if they can get Neil Patrick Harris or David Letterman.


How close are you to getting a movie option?

The only active movie option right now is for my novel Pressure, which has been in development for about four years. There have been nibbles on others, but nothing came of them. I encourage any deranged billionaires reading this to e-mail me an offer.

Swan Song by Robert McCammon, It by Stephen King, Nightworld by F. Paul Wilson, Watchers by Dean Koontz, Off Season by Jack Ketchum, and In The Dark by Richard Laymon.

Shaun of the Dead, the original Texas Chainsaw Massacre, Return of the Living Dead, May, Evil Dead 2, Army of Darkness, Tucker & Dale Vs. Evil, the 80's remake of The Blob, Scream 1 and 2, and Tremors.


Why do you think horror films and books remain popular?

I'm not good at analyzing the psychological and sociological aspects of these kinds of things, so I'll just say that the horror genre has an extremely loyal core fan base that sustains it through the lean periods.

I've got a new YA novel coming out called I Have A Bad Feeling About This, although that one is an action/comedy with no horror elements. And I'm just about to finish up a novel that...well, that one isn't horror, either. However, after that: Wolf Hunt 2, baby!


How would you describe yourself in one paragraph?