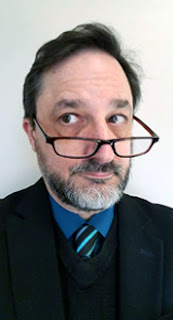 Always. Even as a kid I was writing stories for my family. In High School, I started a humor magazine for the school and wrote a musical comedy the drama department worked on. I wrote for the college newspaper. I edited my law school newspaper. I started a magazine called “Animato” about animated films. I wrote for live action role-playing games and published gaming books and guides. And of course, as a lawyer, I write a lot of briefs and memos.

About a dozen years ago, I decided to finally write that book I’ve always wanted to write.  I was thrilled when a publisher bought it. A minor publisher, yes, but you have to start somewhere.


How did you get involved in fantasy?

I was an early Dungeons and Dragons player in college, having already been a fan of fantasy literature. (I’m so old that the game didn’t even get started until I was in college.) I was the DM most of the time, writing the adventures. Among my regular group were Mark Waid, who later went on to be one of the most successful comic book writers of our day, and Bud Webster, who had many stories published in various SF and fantasy magazines.

Then, in 1989, I helped start one of the first major fantasy live-action role-playing games out there. We’re still around; I have chapters all over the US and Canada.  (http://www.AllianceLARP.com)


Does your job as an attorney influence your writing?

Everything influences writing. As a lawyer, I have to be organized and meet deadlines so maybe he discipline I’ve gained from that has helped.


Tell us how you came up with the concept of a vampire politician.

I heard someone say “Those politicians are all a bunch of bloodsuckers!” and I thought “Hmmm…”

I was mostly interested in what it would be like for a politician to be able to charm anyone to do their bidding, so the book is much more about power and its abuses than it is your traditional vampire book. It’s a political thriller more than a horror thriller, but it also has a lot of humor. All my books do. I think humor is a part of life, and stories just aren’t real if people aren’t sometimes making jokes and doing stupid things that in retrospect are funny. Still, my books aren’t comedies. People die. Bad things happen.

Tell us about your collaboration with Jonathan Maberry.

I met Jonathan just after my first novel came out and he was very encouraging and invited me to his monthly coffeehouse down near Philadelphia. It was about a 90 minute drive for me, but worth it. I learned so much from him about pacing and storytelling, and I took a few courses from him over the years. I’m so glad for his current success and jealous that he was able to move to sunny California, where he teases me with photos of the weather.

A few years ago, we were talking about Sherlock Holmes and I mentioned that I was starting work on an anthology of “what if” Sherlock stories:  What if Sherlock were an alien? Born in the middle ages?  A woman? A child? And so on. He was intrigued and asked to work with me on it, and who am I to say no to Jonathan? We’ve since had two anthologies of Sherlock stories published by Diversion books (“Baker Street Irregulars” and “The Game is Afoot”), and it’s also available in audio books at the following link - amazon.com)

Jonathan is also working with me on my latest project: A “what if” book about the Beatles. We’re using a kickstarter campaign and, as I write this, have about a week left. (https://www.kickstarter.com/projects/667435382/across-the-universe-tales-of-alternative-beatles)

I guess light-hearted adventure with reluctant every-day heroes. Closer to “Guardians of the Galaxy” than “Black Panther.”

My first two novels are young adult fantasy novels, which take the “hero with a prophecy” and turn it on its head. What if there was a great prophecy but the wrong guy is identified as the prophesized one? So in “Arch Enemies” and its sequel “The Axes of Evil” a young bard with no special skills has to figure out a way to solve the mysterious prophecies using only his wits while, of course, many people try to stop him and kill him to prevent him from doing so, unaware that he really isn’t “the one.” Can’t say more without huge spoilers.

“Bloodsuckers: A Vampire Runs for President” involves crazy conspiracy-minded people who claim that the presidential candidate is a vampire. No one takes them seriously, of course, including the main character, a reporter who likes the candidate’s politics. Then there’s an assassination attempt, and the reporter is framed for it and discovers the truth while being rescued by these same “conspiracy nuts.” The only way he can prove his innocence is by proving vampires exist, but that’s difficult when he’s public enemy #1 on the run while some of the vampires are trying to kill him.

My latest is “Big Stick” – a steampunk adventure featuring Teddy Roosevelt and Mark Twain. The main character is a black woman in 1898 America. I wanted someone who had real hardships to be accepted at the time but who could overcome the adversity to stop a national conspiracy to assassinate the president.

There are also a bunch of short stories, many of which feature the characters from the first two novels.

We all like to just imagine fun “what if” stories, don’t we? To believe in make-believe?  This also applies to superhero stories and science fiction.

And we sometimes all like to be scared and to know deep down that everything is actually fine, it’s just pretend.

Oh, what doesn’t?  I’m always interested in political struggles, whether in a fantasy world, the modern day, or in Teddy’s time. Who has power, who doesn’t, and how people use their power to keep it.

But mostly, I just think “Wouldn’t it be cool if…”?


What are your favorite monsters?


What are your favorite horror and fantasy books?

I’m more a fantasy person than a horror person … I prefer a good thriller to a horror story if you get the difference.

My favorite fantasy writers include David Eddings, Tad Williams, Jody Lynn Nye, and George R.R. Martin (who hit me with a stick jokingly when I predicted the “Hodor” plotline. Seriously, read about it here:  https://ventrellaquest.com/2016/05/24/hodor/)

As for thrillers, no one beats Jonathan Maberry. Seriously, I’m not sucking up. I have lots of writer friends, but he’s one whose books I grab as soon as they’re released and read instantly.

Lots. Too much to list here. My blog is full of stuff I’ve learned along the way (which is why it’s called “Learn from My Mistakes”). Go to the blog and scroll down the right side for “Mike’s Comments.”  https://michaelaventrella.com

It depends.  If you are hiring professionals to edit your work, design the covers, and otherwise make it look and read like a book coming from one of the major publishers, then more power to you.

Too often though, new writers get all excited about their first book and self-publish it and then wonder why it doesn’t sell well.

It’s so hard to look at your own work objectively. Everyone thinks their children are prettier and smarter than everyone else’s. Trust me on this – I wrote stuff years ago (before self-publishing was really a thing) and sent it off to various magazines and agents and got a bunch of rejection letters. Looking back on what I wrote then, I see that it deserved to get rejected, but I wasn’t experienced enough to realize that. I’m so glad I didn’t have the opportunity to self-publish it and embarrass myself and possibly taint any future work I would do.

Writing is like playing an instrument or learning a sport or learning to sculpt. You’re going to suck at first. You get better the more you write. Be patient and work hard and then send your work out to see who likes it. If no one wants to buy it and publish it, then maybe they’re telling you something. Maybe you shouldn’t publish it, either. Keep writing. You’ll get better.

1. The Beatles anthology called “Across the Universe” (mentioned above)
2. A sequel to the non-fiction book I wrote about the Monkees’ music (seriously). Hey, it sold pretty well, and the publisher wants one on their solo careers.
3. A non-fiction book called “How to Argue the Constitution with a Conservative” with illustrations from Washington Post editorial cartoonist Darrin Bell. Should be out within a few months; still in the editing stage.
4. A sequel to “Big Stick” where Teddy gets involved in the Spanish-American War, but it’s not about what you think it’s about
5. A new shared world anthology that I’m working on with a noted fantasy author. Can’t reveal details yet.

I love it when readers tell me they couldn’t put my book down and were surprised by the twists and turns. I try so hard not to have predictable characters and plotlines, and that pleases me the most. I also like it when people tell me that at various points, they were scared shitless or literally laughed out loud.

On my web page, you can read reviews of all my books, read interviews I have done with other authors, and read my advice columns for new writers. https://michaelaventrella.com

Friend me on Facebook and Twitter for more, but stay away if you hate puns or liberal politics!