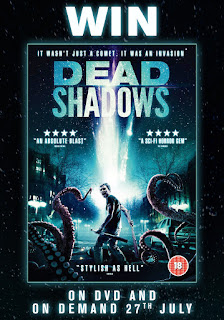 To celebrate the release of the must-see sci-fi horror ‘Dead Shadows’ out on DVD 27th July 2015 - we are giving away a copy.

Exciting debut director David Cholewa delivers one of the most inventive and atmospheric sci-fi horrors in recent years, where the people of Paris undergo an monstrous transformation after a mysterious comet passes through the sky.

Synopsis:
11 Years ago Chris' Parents were murdered the same day Halley's comet was passing in the sky. Now a new comet is appearing and bemused locals gather to view this slightly unnatural phenomenon.

As night falls, Chris discovers that people are starting to act strange, becoming disoriented and violent and it all seems linked to the comet. It doesn t take long before people begin to mutate into something far beyond this world. In a fight for survival, Chris tries to escape from his building with the help of a gun taunting neighbour but will they make it out alive?

Winners will be chosen randomly and will be informed via email.
Posted by JD at 12:54