COMPETITION: Win Scare me on DVD 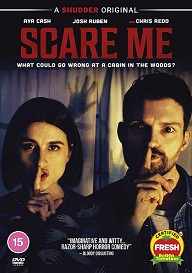 Scare Me  - Released on DVD and Blu-ray from 16th August
And to celebrate we have a great competition for you and 2 copies on DVD to give away.
Synopsis:
Critically acclaimed comedy horror hit Scare Me, from Josh Ruben in his feature directorial debut, which he also writes and stars in, makes its UK Blu-ray debut this August from Acorn Media International in conjunction with Shudder, following its success on the streaming service.
This ‘Imaginative and witty, razor-sharp horror comedy’ (Bloody Disgusting) combines innovative sound design and gripping performances from Aya Cash (The Boys, You’re The Worst), Chris Redd (Saturday Night Live) and Josh Ruben for an outside-of-the-box horror, unlike anything you’ve seen before. There may not be monsters and ghouls but Scare Me will still have you cowering behind the sofa with vivid storytelling akin to those dark nights around a campfire. Set to be released on 16 August 2021 on Blu-ray, DVD and digital, this is one horror that will have you both laughing your socks off and scared silly.
A chance meeting between new in town Fred (Josh Ruben) and renowned author Fanny (Aya Cash) results in the beginning of a ‘friendship’. During a power outage, they decide to tell each other scary stories. With the pizza delivery driver (Chris Redd) joining in with the fun, the two grow increasingly competitive. The more they commit to their tales, the more real the stories become. As Fred’s masculine pride is challenged, fiction turns to fact as the terror gets all too real.
Scare me- released on DVD & Blu-rayon 16th August
Pre-order on Amazon: https://amzn.to/2Xb8xre
For your chance to win just answer the question below.

COMPETITION CLOSED
Terms and conditions
1. Closing date 23-08-21
2. No alternative prize is available
3. When the competition ends as indicated on this page, any and all entries received after this point will not count and emails blacklisted due to not checking this page first.
4. Winners will be chosen randomly and will be informed via email.
5. Entries that come directly from other websites will not be accepted.