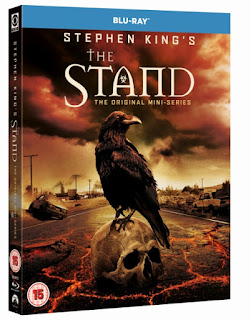 Based on the groundbreaking novel written by New York Times best-selling author Stephen King, THE STAND arrives for the first time on Blu-ray™ from CBS Home Entertainment and Paramount Home Entertainment. Brilliantly restored in high definition with enhanced visual effects, this Blu-ray™ features all four parts of the six-hour Emmy® Award-winning 1994 miniseries.

To celebrate the release of THE STAND, we’re giving you the chance to win a Blu-Ray™, packed with special features, including audio commentary from Stephen King and director Mick Garris and a full-length behind-the-scenes featurette showcasing the making of the miniseries.

Led by an all-star cast, including Gary Sinise (Forrest Gump), Molly Ringwald (The Breakfast Club), Jamey Sheridan (Spotlight), Corin Nemec  (“Parker Lewis Can't Lose”), Rob Lowe (“The West Wing”), Miguel Ferrer (“NCIS: Los Angeles”) and Laura San Giacomo (“Just Shoot Me!”), THE STAND follows a group of survivors after a deadly plague wipes out the entire population. Those remaining must align themselves with either the forces of good, led by the frail 108-year-old Mother Abagail (Ruby Dee, A Raisin in the Sun), or evil, a group steered by a man with a lethal smile, Randall Flagg (Sheridan). The two sides face off in a climactic battle that will determine the final fate of mankind.

THE STAND is out on Blu-ray™ from 7th October

For your chance to win a Blu-ray™ copy of THE STAND, simply answer the following question:

Terms and conditions
1. Closing date 14-10-19
2. No alternative prize is available
3. When the competition ends as indicated on this page, any and all entries received after this point will not count and emails blacklisted due to not checking this page first.
4. Winners will be chosen randomly and will be informed via email.
Posted by JD at 16:45