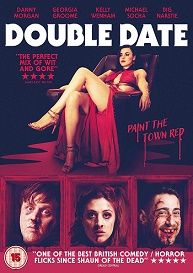 Double Date is out on DVD & Blu-ray from 9th September.

And to celebrate we have a great competition for you and 3 copies on DVD to give away.

Self-assured, and irritatingly cocksure, one thing Alex (Michael Socha – This is England, Chernobyl) can boast about is his loyalty to his dearest friend, Jim (Danny Morgan – On The Road). As Jim’s 30th birthday approaches, Alex promises to help get his best friend laid, so he won’t reach this unwelcome milestone a virgin.

They muster up the courage to arrange a double date with sisters Kitty (Kelly Wenham - Dracula: The Dark Prince) and Lulu (Georgia Groome – Angus, Thongs and Perfect Snogging), but little do the boys know, their partners have other plans for the night ahead…

With appearances from the inimitable Big Narstie (The Big Narstie Show), and renowned actor and director of the moment Dexter Fletcher (Eddie The Eagle, Rocketman), Double Date is fun, ferocious, and full of surprises.

The iconic Prince Charles Cinema will be hosting a special screening of Double Date on Thursday 5 September, followed by a Q&A with the director Benjamin Barfoot, producer Matt Wilkinson, and stars Michael Socha and Danny Morgan. Tickets are on sale now, and the film is out on digital, DVD and Blu-Ray from 9 September.

If you’re looking for the love of your life, be careful…Double Date could be the kiss of death.

Buy from Amazon by clicking here (Opens in a new window)

Terms and conditions
1. Closing date 16-09-19
2. No alternative prize is available
3. When the competition ends as indicated on this page, any and all entries received after this point will not count and emails blacklisted due to not checking this page first.
4. Winners will be chosen randomly and will be informed via email.