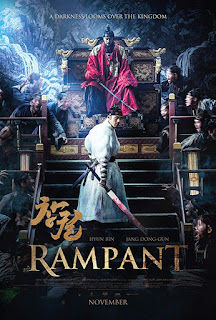 Rampant is a 2018 South Korean historical action zombie film directed by Kim Sung-hoon. It was released on October 25, 2018.

The action story of a hero named Yi Chung (Hyun Bin) who fights against “Night Demons” to save the Joseon nation. Yi Chung is the son of the king, and the greatest martial artist in the world. Although he is given to the Qing Empire as a political hostage, he returns home when his brother, the Crown Prince Yi Young (Kim Tae-woo), calls him back after many years. And it’s because of the nightmarish monsters plaguing the country that Yi Chung is tasked to destroy. Prince Yi Chung (Hyun Bin) will be fighting the nightmarish monsters alongside Kim Ja-joon (Jang Dong-gun) and Deok-hee (Lee Sun-bin)