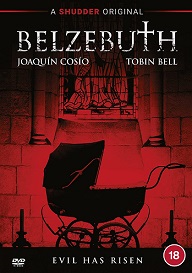 Belzebuth  - Released on DVD and Blu-ray from 13th September
And to celebrate we have a great competition for you and 2 copies on DVD to give away.
Synopsis:
Pray for mercy, evil has risen in Emilio Portes’ Belzebuth, a chilling Shudder Original gore-fest that descends to the depths of hell. The film is set for its UK Blu-ray debut from Acorn Media International on 13 September 2021 and will also be available on DVD and digital.
Horror legend, Saw’s Tobin Bell (Mississippi Burning) stars alongside Narcos: Mexico star Joaquín Cosio (Quantum of Solace) and Tate Ellington (Sinister 2) in this darkly disturbing, gruesome Mexican/English film that will strike the fear of God into you.
After the loss of his own child, Special Agent Emmanuel Ritter (Cosio) is called in to lead an investigation into a spate of deeply disturbing deaths involving young children. Things take an ominous turn when a former Vatican priest (Bell) is enlisted to help.  When he uncovers a link to an ancient demon – the most evil one of all – the descent into twisted terror begins.
Belzebuth is a dark, terrifying new work of demonic possession.
Pre-order on Amazon: https://amzn.to/3zOIC78
For your chance to win just answer the question below.

COMPETITION CLOSED
Terms and conditions
1. Closing date 20-09-21
2. No alternative prize is available
3. When the competition ends as indicated on this page, any and all entries received after this point will not count and emails blacklisted due to not checking this page first.
4. Winners will be chosen randomly and will be informed via email.
5. Entries that come directly from other websites will not be accepted.
Posted by JD at 08:57